I have a confession to make. When it comes to feeling good enough in my life, a big portion of my feeling of self-worth has always been centered on the way my body looks. To say I’ve been on a lot of diets in my lifetime is a wretched understatement. If there has been a way to lose weight (cabbage soup) or firm my body (Buns of Steel), you can bet I’ve tried it. I’ve historically been just as excited as the average American woman when a new wonder food has been introduced or when a cool new product hits the market. As evidence of this fact, you can check out my dusty Ab Roller.

Not everyone is so lucky. I’ve recently been reading Yeonmi Park’s moving memoir, “In Order to Live: A North Korean Girl’s Journey to Freedom.” In her book, Park describes a hunger so savage and desperate that she chose to flee her home country just for a chance to survive. She speaks of a cucumber as I would speak of a three-karat diamond. In 2007, when she risked her life to flee from North Korea, I was probably debating whether to indulge in the Lean Cuisine Mac ‘n Cheese or Chicken Carbonara for dinner.

It puts counting calories into perspective.

Moving back to the present, I definitely have a healthier relationship with food. I make food choices today based more on the phytonutrients and vitamins in the ingredients than on the lowest number of calories I can survive on. I try to nourish my body instead of defile it. Yet, my body image is still on my radar. When I binged on an extra slice of Huck’s birthday cake last week, I felt guilty.

I shouldn’t have felt guilty for eating birthday cake. I should feel guilty for not appreciating the abundance of healthy and delicious options I have available to me.

I’ve started a tradition of sorts in my family where we focus on clearing out our pantry and freezers (yes, freezers – we have three) throughout the month of January. After all the spending and excess of Thanksgiving, Christmas, Huck’s birthday and New Year’s Eve, it feels great to clean out our surplus food and throw out expired items, though the entire initiative started simply because I wanted to save a little money. It was a game at first – could our family of four make it a whole month living just on the food in our freezer and pantry? I have found that we still do spend a bit on little things (lettuce, apples, bananas, milk and bread), but it’s actually surprisingly easy to eat straight from the pantry.

This year, as I began sifting through the pantry to see what we were dealing with, I started to feel sick to my stomach. We have so much. So. Much.

This is how much we have. 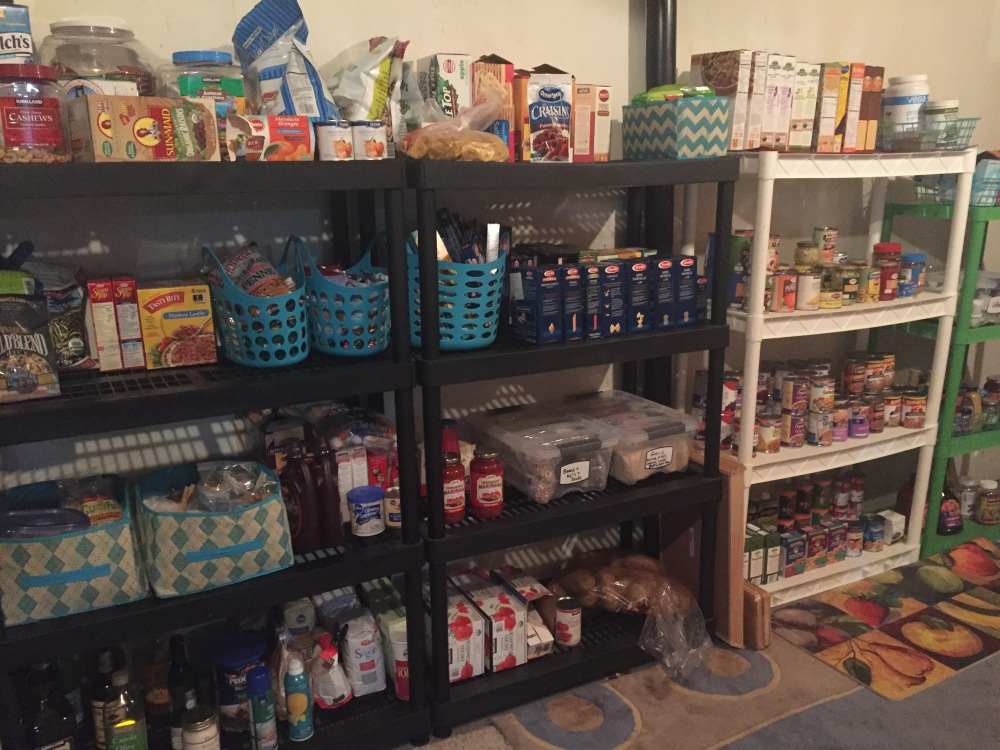 We have 34 unopened boxes of pasta. (We eat pasta about once a week, so that means we’re good until about August 22nd.) We have four pounds of quinoa and a 12-pound bag of brown rice that barely has a dent in it. We have three freezer bags full of broccoli, two bags of Gardenburgers and five boxes of frozen waffles. We have olive oil, sesame oil, canola oil, grapeseed oil, avocado oil and organic apple cider vinegar. We have a dozen boxes of cereal and two bins full of every grain you can imagine. Need spelt? We’ve got it! Chia seeds? Check!

We are not preparing for the Apocalypse. We have simply accumulated so much during 10-for-$10 sales and typical Costco shopping trips. I don’t even know how it happened, to be honest with you.

I’m sharing this even though it’s a bit embarrassing, because I don’t think we are that out of the ordinary. I don’t know anyone in my circle of friends that doesn’t shop at Costco. Does everyone buy just what they need, and eat everything they purchase? No. The average American throws away about 25% of the food & beverages they purchase. 25%! One out of every four slices of bread!  That’s mind-blowing.

We have so much, and so many people have so little. I’m not just talking about people like Yeonmi Park who live in Communist countries devastated by famine. I’m talking about little kids who go to school with my own children and rely on the Free/Reduced School Lunch program to fill their bellies. I’m talking about veterans huddled on the 16th Street Mall in downtown Denver that don’t know where their next meal is coming from. I’m talking about the rest of humanity that seeks food in order to live, rather than simply look good.

Our excess is embarrassing. I am so grateful that my fellow book clubber chose Park’s memoir this month so my family’s extravagance could be illustrated so eloquently. It has really impacted me, and it will change the way I approach meal planning. I no longer think we need a pantry-cooking January each year – it’s probably more likely that we need a week of pantry-cooking each month. I no longer want to make four different dinner selections for the four members of my family.  We can make do with less. We can make do with a lot less.

I owe it to the people in the world with empty bellies to appreciate how full mine is.